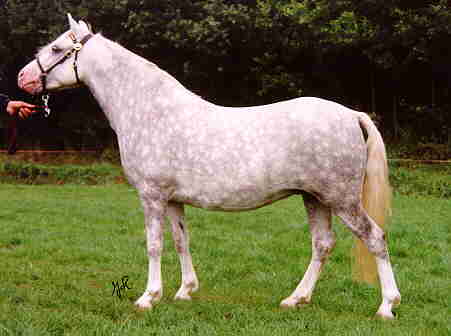 Sumrin Tessa was born on april 10, 1984 in our stable. Tessa has never been showed very much, but I have a special connection with her, mostly because she reminds me of her sire's character and the qualities she represents.

Tessa is not particularly one of the most modern mares. Her head may be not up to today's standards, but she does move! She also passes this on very well to her progeny. Here is her history:

1986: Baught back in foal to Vardra Julius by Mr. Jan van Hest and me.

1991: Shown for the first time. She was second in a heavy class, leaving National champion 1995 Revel Humming Tune behind her!

1994: Shown for the second time. Had a first premium, second place. Didn't make it to the national, because she was too old-fashioned. Many people disagreed there with the judge. I don't mind, as long as I get to take her home. Her foal, Sumrin Tomi ended up 1st in a class of 40 colt foals.

Her 1998 foal, Sumrin Turquoise by Vechtzicht's Hero is a superb moving filly. She will be retained at stud to continue the line.

Sumrin Tessa passed away at the grand age of 29 in the fields of the van Hest family.