Dyrin Grey Dawn has been at Dyrin all of her life. I have no records of her being shown, but Mrs. Retera told me that Sumrin Tessa bears a striking resemblance to Dyrin Grey Dawn. She should know, as she spent a summer at Dyrin once and saw Dyrin Tina as a foal at foot with Dyrin Grey Dawn. Also, I must conclude that Dyrin Tina must have inherited her strong movements from Grey Dawn, as neither Criban Bantam nor Dyrin Martini get strong reviews on their movements and neither do most of their offspring. Dyrin Puccini was a very strong mover, though. 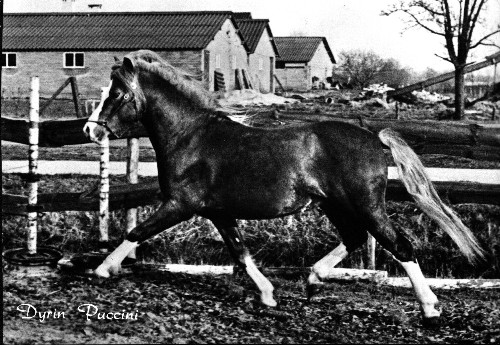 Dyrin Kiwi was sold on to Ala stud and probably the most famous pony out of her line is Lacy Primrose, dam of Lacy Bleddyn and many more well-known ponies..

Dyrin Puccini was used for one season at Dyrin and exported to the Netherlands. In The Netherlands, he did not end up with a serious breeder, so there is no offspring by him known anymore.

Dyrin Quorum was used for a season at Dyrin, but I do not know where he went from there.

Dyrin Rowena was retained at Dyrin, her granddaughter Dyrin Brenhines was exported to the Netherlands and has left a wonderful strain of ponies for the late mr. Ewalts.

Dyrin Sirius was also exported to the Netherlands, she died young, but scored a first premium as a youngster. Just based on her offspring in the Netherlands, Dyrin Grey Dawn would be qualified for the "preferent" award, if only she would have been registered with the NWPCS!

Dyrin Will O The Wisp was retained at Dyrin. her son Dyrin Achos was used at Afan stud in Wales.