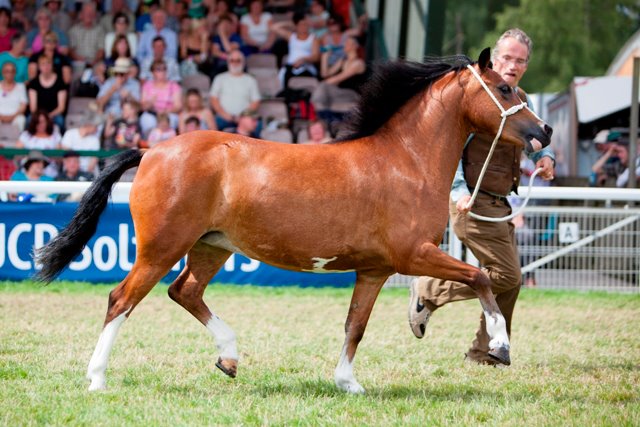 Tatum is by the stockgetter Kai Midas. Midas was awarded first premium in 2008 and has already thrown good stock, amongst which a national best three year old. Kai Midas has three crosses of the famous Twyford Gurkha and his full brother Twyford Gendarme. Kai Midas' dam is a big winner in Austria and his grandmother was many times champion in Germany. The maternal line of Midas goes back to Revel Jewel, dam of Revel Jeeves.

As we had to downsize the stud, due to health constraints, we came for the tough choice to see who is going. We did make the choice to keep her daughter Sumrin Saint Mary as well as her maternal aunt Sumrin Timea at the time, even if Tatum might be the most promising breeding mare of the three. We are very happy that she ended up with the young breeder Jelmer Couperus, to start up his new stud and be a partner with the buckskin stallion Twisthoeve (G) Rhydaman.

On May 29, 2017, Sumrin Tatum O'Neill was purchased back by the family van Gestel to breed a foal out of her. As we are scaling down, we are offering Tatum for sale to an interested breeder.

Tatum's name is misspelled intentionally. Her pedigree is at the bottom of the page, with links to pages of her ancestors on this site.