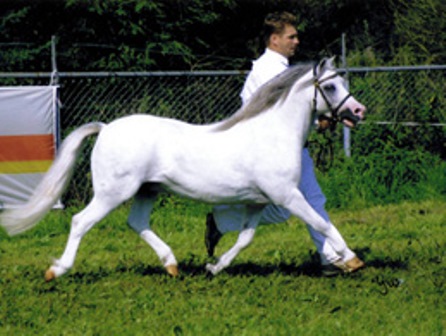 Kai Midas is an interestingly bred stallion that produced some great offspring for Sunstar stud in eastern Netherlands before he was purchased by the late Hans van de Nieuwenhuizen.

Midas carries 3 lines of Twyford Gurkha and 1 of his full brother, Twyford Gendarme. Midas is out of the Revel Jewel line, just as Revel Jeeves, Twyford Juggler and others. Besides, he carries valuable Rhydyfelin, Llanerch and Hope lines. His mother Sadiqui Little Gift was Austrian champion, his grandmother Highland Little Jem has been German champion.

Midas is now at Sharonahoeve stud in Echteld, the Netherlands, where he continues to be a stud stallion.